A summary of our second trip to our casa

We arrived at the airport Tuesday afternoon around 1:30pm and got the green light at customs after “showing” the curious customs officer what was in all that luggage we had. Gave him my spreadsheet of items new & used and the receipts and prices totalled. He liked that I was so organized…….it is helpful for us too as we try and remember what all we have taken to the casa. Easyway was there to greet us and took us back to their office for a cold mini Sol and away we went in our VW Pointer wagon. Mark was thrilled about that since we had originally booked the Tsuru special. The car is older, a bit funky and lacks ammenities such as good A/C and music output, but TODO BIEN.

Down 307 we head and stop to fill our bellys at El Oasis which is next door to the old Telebodega – yum! Then we stop in at at our favorite Hellabodega (the nickname we’ve given to Telebodega) first thing to replace the airbed that I have grown so tired of. It didn’t take us too long to figure out what we wanted in a King size bed (which you need if you’re 6 ft tall or over). We also got the wood bases. We did the two twins with the option to put them together for a king – works great! Then we hit Soriana for a few basics like milk for our coffee, beer and water, yogurt, lunchmeat, cheeses and fresh rolls. I really like this store a lot -a great alternative to WalMart. We arrived at our casa and the rest of the days all seem to run together as we were busier than heck!

Our beds arrived and we enjoyed putting the rooms together and hanging the new curtains made by Mark’s sweet mommy!  The curtain rods are bamboo and the rod holders came from the carpenter in Francisco Huy (on the Coba road). The great deals on bedding from all of our favorite discount stores and my TJ Maxx $20 lamps worked out great! Mark finished our closet organizer that he built from pine and stained a beautiful dark tone.  We used nice bamboo poles (purchased at a furniture store in the Centro Maya mall) for the closet rods. We’re planning on the louvered doors in the future to finish it off. 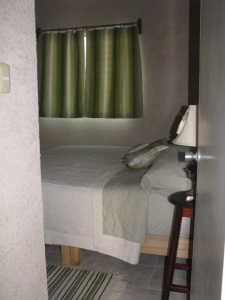 Our dear neighbor Gustavo (and we met his adorable, sweet wife Ena at the party) came over and helped communicate with our neighbors Marco y Mary about finishing our side of his wall and installing a gate. So, that is taken care of and what a relief!  Now Falcon Home Remodeling can complete the great job they did on our patio wall.  I can’t wait to get plants and have so many ideas for completing our backyard oasis.

Monday morning of Mark’s 53rd birthday we woke early and went to Xcacel for a lovely walk down the beach. It still amazes us that we have stumbled upon our own little piece of paradise here. We took a swim at 7:30am in the Caribbean Sea laying on our backs with the sun behind us and the moon still high up in the sky in front of us.  Amazing beauty!!!  We were in such bliss as we began walking back to our car swinging our coffee cups in our hands…….then realizing the car key was in Mark’s mug was now somewhere in the sand.  We looked behind us to see some of our footprints had been washed away!!! Our hearts sunk and we began searching…..but gave in as it was like looking for a needle in a haystack. We walked back to the casa and called Easyway. They rescued us with a new key a few hours later! And no charge on our credit card for that service!!!  Great car rental company! HIGHLY RECCOMMENDED!

Our daughter, Amanda and her boyfriend arrived on Monday evening, muling down another 150 lbs. of goods.  We ate dinner at El Fogon in the colosio – their food is awesome as usual and the price can’t be beat. They are on 30th and have two locations – one north of Constituyentes and the other south of and close to Juarez. It was great having the kids come down to check out the house and show them the ropes as they both work for Alaska Airlines and will likely use the place occasionally.

We drove out the road to Coba and found a huge place in Macario Gomez to get ironwork. We wanted to get the gate ordered and installed, but knew we had little time left. We asked how long it would take and he said about a week – told him we needed it done sooner since we were leaving on Friday. It was delivered and installed 28 hours later! Wondeful work and service, excellent price! I’ll post pictures soon. 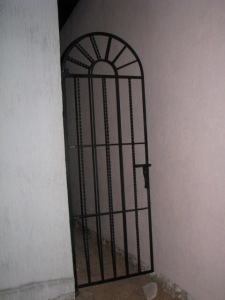 Also, picked up a couple of stools on the road to Coba from the same carpenter where we purchased our Adirondack style chair.  $330 pesos each. There’s a great nursery on that road also that I want to go back to with some awesome prices and a decent selection for a small operation. There was an adorable baby coatamundi handing out in the nursery.The Mayans out here in these villages are quiet and speak no English, but they are pleasant and very patient people. Bring a translator. We have a little Franklin one that we couldn’t do without!

We ate in Akumal one evening with Amanda and Peter and enjoyed a quiet, stormy evening at the Lol Ha. I  really love the tropical type storms that pass over. Being from Washington, we are really used to the rain, so warm rain is a special treat. The contrast of the bright, turquoise water and the dark skies is beautiful! 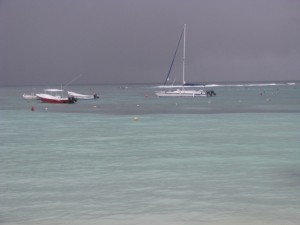 Oh, almost forgot – on the road to Coba we saw a tarantula the size of a salad plate cross the road. Wow! Mark and Peter actually saw him first as he made his way under the car and I then looked in the rear view mirror watching him complete his journey across the highway.  He was HUGE!

Our last day we got a load of dirt (love the light colored soil) and Mark, Peter and Dale Campbell our neighbor across the street hauled ass and shoveled and wheelbarrowed a 7 cubic meter load into the front yard. Gustavo gave us some nice low lying plants and Mark put them in and accented them with some citronella candles and a couple of big, old conch shells. This all as we were packing up and closing down the house. I was running a couple of errands to the pueblo back and forth and coming back on the jungle road, the car died!  It sparked and when I saw a few flames, I freaked……grabbed my camera and the shovel I’d just purchased for the guys and jumped out of the car. I was relieved that all the laundry in the car didn’t go up in flames as I walked back to the casa. Fortunately I was only about a block and a half away. When Mark opened the hood, he saw that the battery had been installed backwards!!!  Ugh! Here we are, in the midst of this busy morning of departure and now this!  Once again Easyway to the rescue with a new car for us in plenty of time to get to the airport. TODO BIEN!

Empanada Joe’s in Tulum pueblo – Great coffee, empanadas and beverages like aguas frescas and smoothies. The hibiscus cold tea is delicious!  And they have free WiFi! Nice place! (Sadly, this place is now closed.)

Cocopesa in Tulum pueblo – We went here to order tierra (soil) and found that they have an awesome selection of tools and hardware as well at paint and many other things. They had 20% off anything Truper that day and every Saturday they have 30% off. I bought a shovel and a garden rake, each around $10, actually less with the exchange (which was better than we’d all seen in a loooong time!). There’s a woman named Sahara that works there and speaks very good English and is a joy to talk to about everything! Sweet lady!

New hardware store in Chemuyil pueblo – well new to us actually. I guess they’ve been open for quite a few months but we just found it.  It’s just around the corner from the big grocery that is just east of Leo’s. They have a lot there for a small hardware store. We needed another shovel on the last day to move dirt and it was also a great price – around $10 also. We seemed to have to run over there a couple of times for some items and it’s nice to do business in our local town. In fact, we have decided that we wouldn’t make any special trips to Home Depot in Cancun for anything ever again. They really don’t have all you need and it’s much too far. Only reason we went was we were going to the airport and Costco anyway. I did find a really good floor squeegie there though. We actually find the same issue here at our local Home Depots too…..and prefer McLendon’s which is an original local hardware store (small chain) that has been around for many decades.

Well, that’s all for now……there were so many fun times and great meals, some of which were prepared in our own cocina. We had a really wonderful time meeting so many new neighbors and friends. We are loving this new phase of our lives and feel ultimately blessed!

Posted by Casita Paraiso on October 28, 2008 in Uncategorized